It’s been two years since DJI set a new standard for drone safety. We launched our “Elevating Safety” 10-point plan for industry-wide drone safety in May 2019 at an event in Washington, D.C., where we made an unprecedented commitment to build sophisticated safety systems into our drones. DJI has always been the drone industry’s technology leader, and with our plan to keep the skies safe in the drone era, DJI made our safety leadership clear as well. 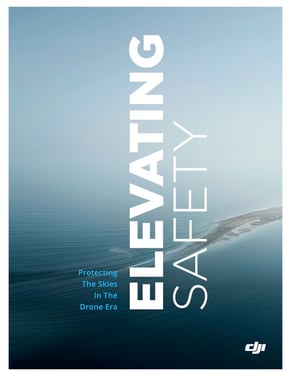 Two years later, DJI still leads on safety. In the United States, the Federal Aviation Administration (FAA) has enacted a rule requiring Remote ID for almost all drones, and just launched a mandatory safety knowledge test for recreational drone pilots – similar to voluntary solutions DJI first integrated into its products in 2017. Other drone manufacturers have launched a wide range of new platforms with innovative capabilities, but none have come close to matching the safety measures DJI developed voluntarily.

It’s worth reviewing what DJI called for in “Elevating Safety,” what expectations we set for ourselves and others, and what still needs to be done:

Our “Elevating Safety” report also performed another valuable function. DJI methodically reviewed the available evidence about drones supposedly experiencing collisions or near-misses with airplanes and helicopters. Our study showed that most “drone sightings” – and even “drone collisions” – involve birds, bats, balloons, or nothing at all. Years after the most infamous drone incident, the supposed drone incursion at London’s Gatwick Airport that led to the cancellation of 1,000 flights before Christmas 2018, authorities have not released any evidence a drone was involved.

This incident was the most prominent example of a common pattern: A drone sighting can trigger sensational news accounts that spur legal and regulatory actions, but it rarely leads to an honest evaluation of what happened, much less any real safety lessons. By debunking some of the most outrageous false claims about drones, we shifted focus to where drone safety improvements could have the greatest impact: Reducing the risk of conflict between drones and helicopters.

Unlike airplanes that take off and land in predictable paths from fixed locations, helicopters routinely fly irregular routes at lower altitudes, appearing in shared airspace with little warning. Real-world incidents showed that even well-intentioned drone pilots, trying hard to fly safely, could suddenly find themselves in dangerous proximity to a helicopter. That informed our decision to install AirSense in almost all of our consumer drones, which creates the strongest technological solution to help drone pilots steer clear of helicopters. 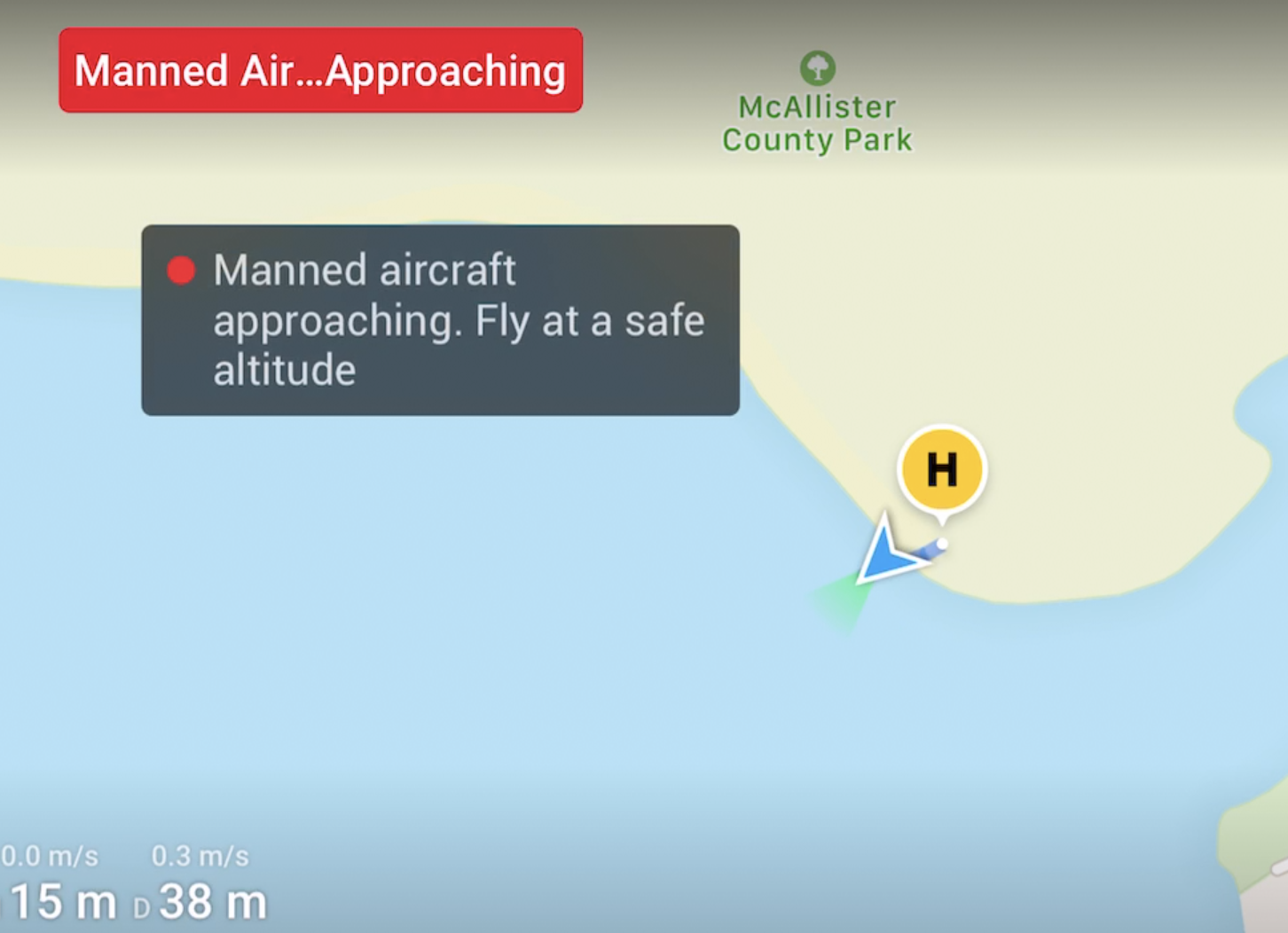 Our expansion of AirSense was just one of the 10 recommendations listed in “Elevating Safety.” None of them were easy; all of them impose costs on manufacturers, pilots or regulators. Two years later, they remain critical goals for the industry – and there’s still work to be done. Judge for yourself:

✅ DONE. AirSense receivers pick up ADS-B signals from airplanes and helicopters, and warn DJI drone pilots when there’s a risk of conflict. We fulfilled our commitment: the technology is standard equipment in our new products. Installing AirSense in our drones adds cost and weight, but it has proven its worth. No other drone manufacturer has followed our lead.

✅ DONE. DJI updated some of its flight control software in 2019 to monitor the distance the drone flies from the pilot, as well as its elevation and angle in the sky, and warns pilots when they may no longer be able to clearly see the drone well enough to avoid obstacles. The results from this step were inconclusive, with mixed feedback from customers, and we are evaluating whether this feature provides a tangible safety benefit rather than a distraction.

✅ DONE. DJI’s safety standards group worked with Canadian authorities to gather voluntarily-reported data on drone performance to comply with Transport Canada’s safety assurance framework. DJI also supports the work of ASSURE, an FAA-sponsored center of excellence for drone safety, which rigorously tests and models drone performance to improve safety. We intend to continue using similar data to develop standards for reliability and maintenance, as well as to monitor for potential issues.

⭐ IN PROGRESS. Governments and private groups have begun to establish central repositories for reports of drone safety incidents, as well as clear standards to evaluate them. The FAA has opened its anonymous Aviation Safety Reporting Program to include drone incidents. In the UK, Altitude Angel began a similar “just culture” program to receive anonymous drone incident reports.

🔴 NO PROGRESS. Based on our experience with these groundbreaking safety solutions, we urged our competitors to adopt them as well to improve our common goal of safe drone flight. Several government and industry groups have since concurred that geofencing is a crucial safety and security feature. No other drone manufacturer has taken these safety measures, and several disappointingly market their products as easier to use or more capable than DJI’s because of their lack of geofencing.

✅ ALMOST THERE. The FAA’s Remote ID rule took effect in April 2021, and standards for implementing it are now being developed. Most drone pilots have to do nothing for the time being, and the first functional deadline for newly-made drones to comply is in September 2022. In Europe, Remote ID is an integral part of the European Union Aviation Safety Agency regulations that will be fully applicable at the end of 2022. The emergence of U-space and UTM requirements around the world takes this requirement to the next level in the years to come. In Japan, Remote ID will be enforced in June 2022, concurrently with the Drone Registration System. Other countries are also watching these developments and moving forward with Remote ID regulations.

✅ ALMOST THERE. Professional drone pilots are already required to pass basic knowledge tests in many parts of the world, and it is now spreading to recreational pilots as well. The FAA has developed The Recreational UAS Safety Test (TRUST – get it?) for aeronautical knowledge and safety, reflecting a reasonable approach to educating and testing drone pilots on the core principles and rules they need to know. New standardized tests in the EU have been adopted by most European countries, and other countries such as New Zealand are also moving forward with their own testing systems. We are glad that DJI’s 2017 Knowledge Quiz initiative charted a path for regulators to devise testing that is focused and pragmatic, maximizing compliance and safety knowledge for use of drone technologies.

⭐ IN PROGRESS. In the United States, Congress first ordered the FAA to develop simple and clear criteria for restricted drone flight areas in 2016, in a provision known as Section 2209, and further encouraged the FAA to establish those rules in 2018. Yet the FAA has still not proposed a first draft of its rules to comply. This means critical facilities that deserve protection are still subject to drone intrusions by innocent, unknowing operators. It also leaves an inconsistent patchwork of restrictions in place, instead of a system that’s easy to understand and thus easy to comply with. Many aviation, technology and infrastructure stakeholders have called on the FAA to implement the law, and DJI stands ready to geofence these locations to prevent our drones from intruding into areas that are considered sensitive. In Europe, states will have this data ready by the end of 2022. In contrast, Australia launched a single source of data on restricted areas in 2019, and New Zealand is proposing to follow suit.

🔴 NO PROGRESS. Creating a legal framework to respond to these threats has proven difficult in many countries. Interfering with any aircraft in flight, including a drone, requires special legal authority and imposes new consequences on anyone who does it. In the United States, this authority has been granted to some federal agencies, but no progress has been made in empowering the state and local agencies that are most likely to respond first to an emergent drone threat.

⭐ IN PROGRESS. As more government agencies have adopted DJI’s AeroScope system, they have been able to take enforcement action against drone pilots who have allegedly violated aviation laws. In the US, federal authorities have charged drone pilots who entered prohibited airspace near the Super Bowl, as well as a pilot who crashed his drone into a Los Angeles Police Department helicopter. While the overwhelming majority of drone pilots fly safely and responsibly, DJI believes publicizing these and other arrests is a strong deterrent against unsafe flight.

Even with so much still to do, it’s important to remember that drones are the safest form of aviation the world has ever known. Drone pilots conduct over 88 million drone flights in the US alone each year, and not a single fatal accident has occurred. Unlike every other form of aviation, the fatality rate for drones is zero.

It’s no exaggeration to say DJI’s safety leadership is a big reason why the world’s skies have remained safe in the drone era. Since our products are the most widely used drones for personal and professional uses, our solutions have an outsized impact on the safety record for all drones. From regulatory advocacy to pilot education to innovative technology, DJI remains committed to continuous safety improvements for ourselves and for the entire drone industry.

[1] “Risk-based solutions such as manufacturer-installed geofencing technology are essential advancements in mitigation and should become the industry standard, rather than the exception. The BRTF believes that manufacturers should share in the responsibility for helping to restrict access to sensitive flight locations, including airports, except for those authorized for approved UAS missions.” (Page 45)

[2] “The UAST recommends that geofencing be implemented on small UAS platforms for high risk locations.” (Page 3)

[3] “OEMs should equip their UAS with geofencing capabilities.” (Page 21) 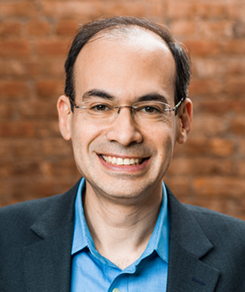