Just over one month ago, on 24th June 2021, residents in the densely populated area of South Moravia, Czech Republic, had their lives uprooted. They were hit by a natural disaster uncommon on this scale in Europe, a tornado with winds of at least 219km/h (136 mph).

This is a gif not a smooth video

The devastation it caused left thousands of damaged homes behind, and in some cases, destroyed whole city quarters. It flipped cars over, lifting them and throwing them into trees that had managed to stay in place. It created an apocalyptic scene that was unimaginable in a region known for its wine production and unique culture.

When the incident was first reported at 7.23pm, firefighters were immediately dispatched, and from that moment on thousands of professionals and volunteers were on hand to deal with an area of wreckage approximately 26 square kilometers (10 square miles), the equivalent of more than 4,800 football pitches. A total of 2,000 professional firefighters from all over the Czech Republic and approximately the same number of volunteer firefighters, alongside many locals and people offering help, took turns to do their utmost in the affected area. The Fire Rescue Services of the Czech Republic deployed approximately 550 pieces of equipment at the scene.

We asked Col. David Jirous, the head of KOPIS (Operational and Information Centre) of South Moravia, to tell us more…

-Can you describe the scene in your own words?

“It was something unimaginable because tornadoes are very rare in our area. Houses were destroyed, trees uprooted, and debris was left everywhere.”

“In the first phase it was very difficult, there was a lack of forces and resources, but above all, we had very little idea of the size of the affected area. Therefore, drones were subsequently used to map the terrain and create a real-time digital map of the devastated area.”

-What time did you first start using the drone and mapping software?

“The DJI Mavic 2 Enterprise DUAL took off shortly after dawn the following day, when the light conditions allowed us to take images of the devastated landscape.”

-How long have you been using drone technology and GINA software?

“Fire rescue services in the South Moravian Region have been using GINA technology since 2012 and drones since 2018.”

-What benefits do drone technology and GINA software give you that you wouldn’t usually have access to?

“Thanks to the use of drones, we have almost immediately an aerial perspective and digital map of the affected area which is distributed to the GINA app. This is accessed by firefighters in the field and the local command center for an accurate picture of the scene and location tracking. We had an up-to-date overview of the affected area, the amount of damage and the force and resource requirements. Thanks to technology we can react flexibly to altering situations in the field.”

“In general, GINA significantly improves the efficiency of both routine and special operations, reduces arrival time, provides real-time information support, and increases the level of cooperation among all responding units.” 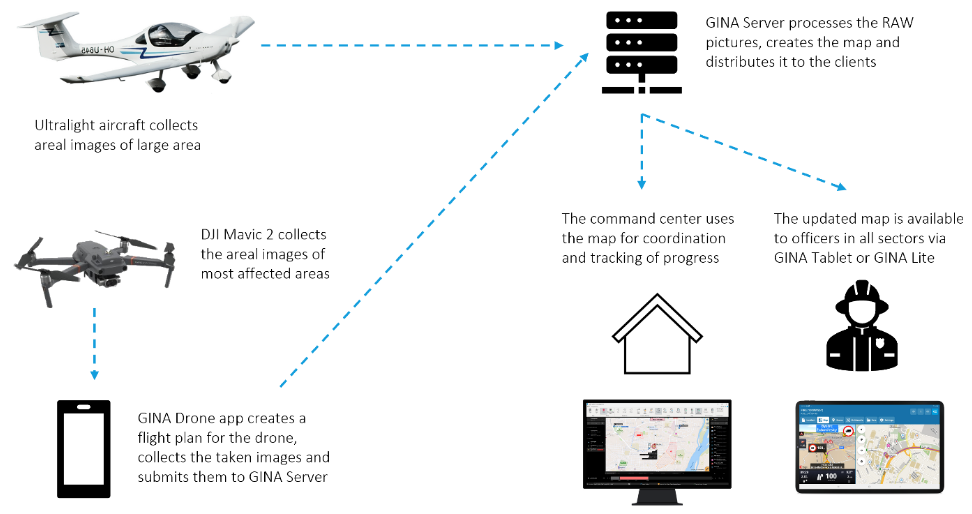 -If you didn’t use aerial technology and GINA software, how long would it usually take you to map an area of this size and how would you do it?

“Considering the size of the affected area (over 26 km), which includes difficult to reach isolated areas, it would be very time-consuming to map by purely ground-based means. We’re talking about days rather than the hours it actually took. If we didn't use drones, we would have to rely on people reporting back from the area where they were working.”

-Is there any additional information you’d like to give?

“Thanks to the experience gained from mapping areas damaged by tornadoes, we want to apply this knowledge to the project we are currently working on, which focuses on automatic mapping of the marked area in GIS or in GINA Tablet. A unique feature of this project will be the time it takes for the digital map to get to first responders in the field. We would like to distribute the data from the drone to GINA apps in near real time using a fast mobile connection such as 5G and LTE networks, or on a local network.”