We at DJI love to share the innovative work that you create to inspire others. Today, we are sharing a collaboration with Stunt Camera Crew, whom we asked to take DJI Ronin 4D and see what they can make with it. But why Stunt Camera Crew? See for yourself.

For two heart-pounding minutes, Rooftops of Paris follows a protagonist racing up narrow beams, leaping over wide chasms, and hurling himself at the edge of danger. But the split-screen reveals an even more amazing sight – a filmmaker is matching his every move, steps away from him, while holding the DJI Ronin 4D cinema camera in his hand. And through all this insanely dangerous action, the camera stays level and stabilized without any shudder or jarring footage.

With this video, Stunt Camera Crew beautifully shows us what happens when you combine the acrobatics of urban parkour with the cinematic expression of filmmaking.

Who is Stunt Camera Crew? 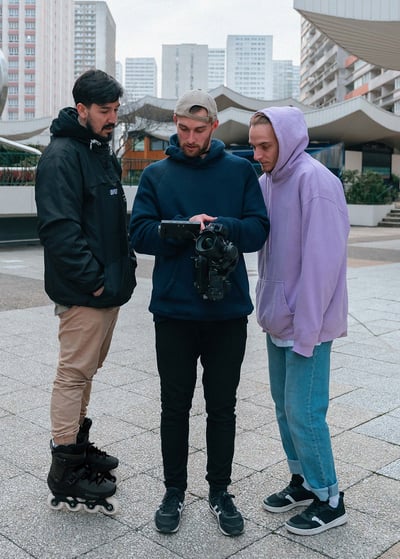 Stunt Camera Crew (SCC) was created in 2005 to offer production houses a never-before-seen way of capturing dynamic scenes. The team brings together 20 years of parkour training, 10 years of film stunt performance, and specializations in rollerblading, free running, and even martial arts, which they use behind and in front of the camera. The team’s mission is simple: “We aim to provide an efficient and creative way to capture those seemingly impossible moments through film. To captivate audiences and to keep them in suspense through the power of storytelling.” 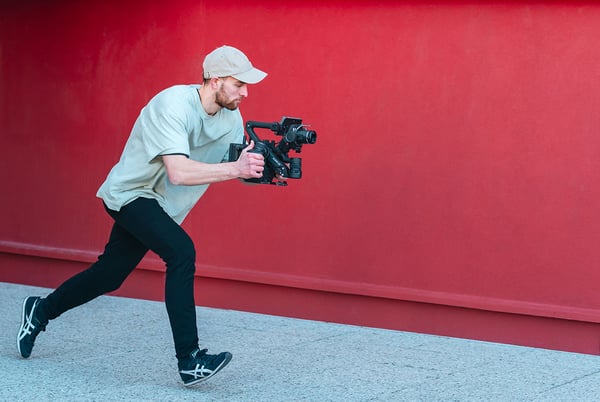 DJI Ronin 4D is compact and light enough for a running shot. Photo by SCC.

Stunt Camera Crew is challenging the conventional methods of action cinematography. This sentiment resonates with DJI Ronin 4D, a camera that was created to revolutionize how filmmaking is achieved. Together, what could they create?

Moving with the Stunt 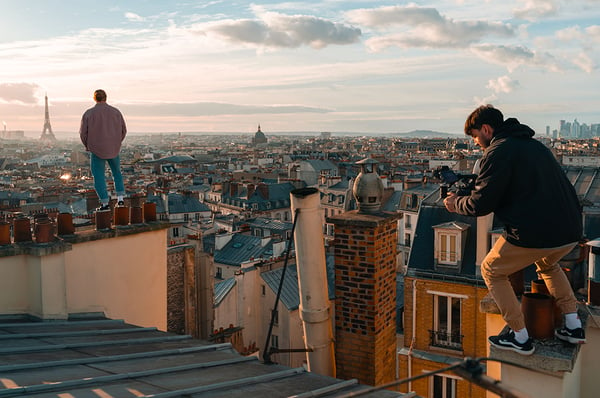 To safely and reliably capture a dynamic, dangerous action sequence on video, traditional film sets rely on wide angles, tracks, cranes, and multiple cameras. Unfortunately, such methods are more possible on a Hollywood-scale budget than on an independent crew. Meanwhile, the camera positioned far away from the moving actor loses some of the energy of the scene.

“We have often been on sets where camera operators have no experience with these movements,” says Daniel Ilabaca, director. “We believe operators ought to be athletes themselves to know both sides of the camera.” In Rooftops of Paris, a single camera operator runs directly with the protagonist, played by parkour artist Johan Tonnoir, all while keeping Ronin 4D in hand. A LiDAR focus module maintains pinpoint focus on Johan through every move by constantly creating a 3D cloud of everything in the frame to assess distance for accurate sharpness every second.

In one particularly daring take, an operator follows Johan up the scaffolding of a steel bridge, with the Parisian skyline perfectly positioned and vividly captured in the frame. “The ability to auto-track a subject whilst running is a breath of fresh air,” shares Dennis Weibel, who jumped from one roof to another, right behind Johan. ActiveTrack Pro enables agile cinematographers like Dennis to move freely while the camera assists by accurately following the subject.

By having the camera and operator as part of the choreography, the crew is smaller, making it more agile and able. Their professional experience as movement artists means they can anticipate the actor’s next move and stay in the moment. And the result is a captivating set of visuals that exceed the viewer’s expectations and pull them into the scene. 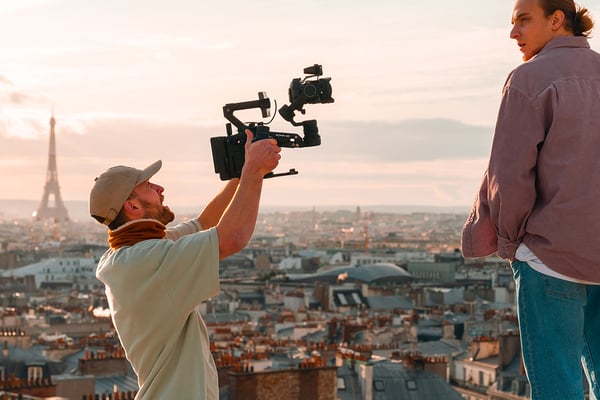 It’s easy to get drawn into the incredible acrobatics that Johan the actor is taking the viewer through. And while the sequences appear to be a single, smooth take, the team required tight coordination to pass the camera to each other without a single jitter in the final footage.

While it appears the movement is done on the fly, SCC takes careful consideration and planning of each scene, looking for opportunities for a smooth transition. “We always approach spaces this way. It’s what stimulates us,” they say. And as a complement to their refined navigational skills, Ronin 4D proves a worthy tool that is up for the task. “The weight is ideal for parkour and running. And the active Z-axis is excellent, especially useful for rollerblading at high speeds, backward, and down a set of stairs.”

While the team is filming during an all-out sprint or rolling down a set of stairs, Ronin 4D’s Z-axis is constantly measuring the distance between the camera and the ground with visual and time-of-flight sensors, leveling out up and down movement in real-time. Where a bouncy shot was once an inevitability, Ronin 4D makes it a problem that has been readily solved. 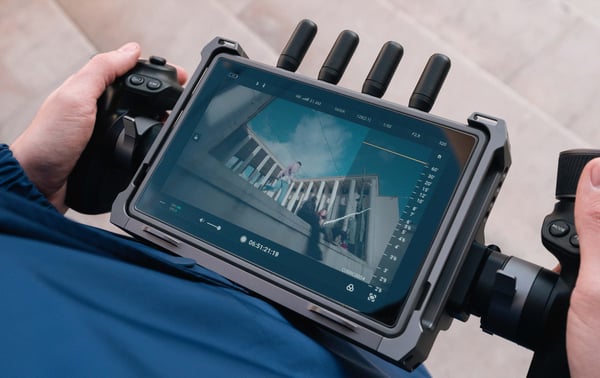 The High-Bright Remote Monitor lets a stationary operator control the camera with ease. Photo by SCC.

When we asked Stunt Camera Crew to push DJI Ronin 4D to its limit – and a little more – they did not disappoint. And we are happy to report that this new camera system has the team’s seal of approval. “Whip panning is insane! The range connection of the monitor is absolutely amazing. The built-in ND filters: wow. We could go on!”

And just like any good test, we asked for feedback and ways the Ronin 4D experience can be improved, particularly in more ways to hold the camera in different dynamic handheld shots, improving startup time, and integration of other lenses through its adapters. The engineering team loves this kind of real-world feedback and is hard at work to see how to address them for future use. But for now, SCC is happy to include this new camera in their daily lineup.

“Most of everything is near impossible in comparison to shooting on Ronin 4D. We would love to suggest this system for every significant production we work on in the future as the first to consider.”

The Rebirth of Filmmaking? 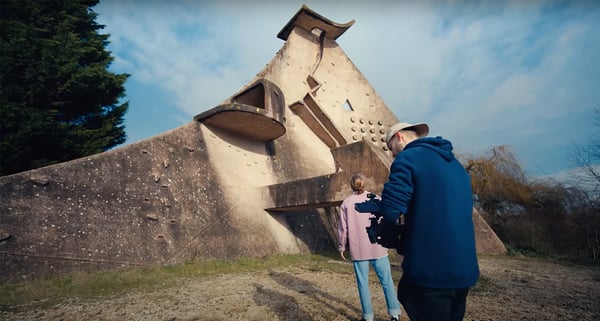 Ending at the famed Dame du Lac, where parkour was born. Photo by SCC.

Rooftops of Paris ends in a place that holds a special place in the history of parkour. In the closing shot, the protagonist stands still, admiring a tall, undulating sculpture with ledges and crags – it looks obvious what he has in mind. In reality, this sculpture, the Dame du Lac in Lisses, France, is known widely as the birthplace of parkour. As he looks up to the sculpture, the camera moves back to reveal a camera operator pointing Ronin 4D at him, standing just as still.

Stunt Camera Crew will be the first to tell you that parkour is the rebirth of movement, offering a new way to see the world and interact with it. With its ability to capture scenes in an entirely new way and offer professional cinematography on a compact, intimate scale, is Ronin 4D the rebirth of filmmaking?

To quote the film, "Aren't we all the origin story of tomorrow?"

Learn more about DJI Ronin 4D on our website and introduction video. 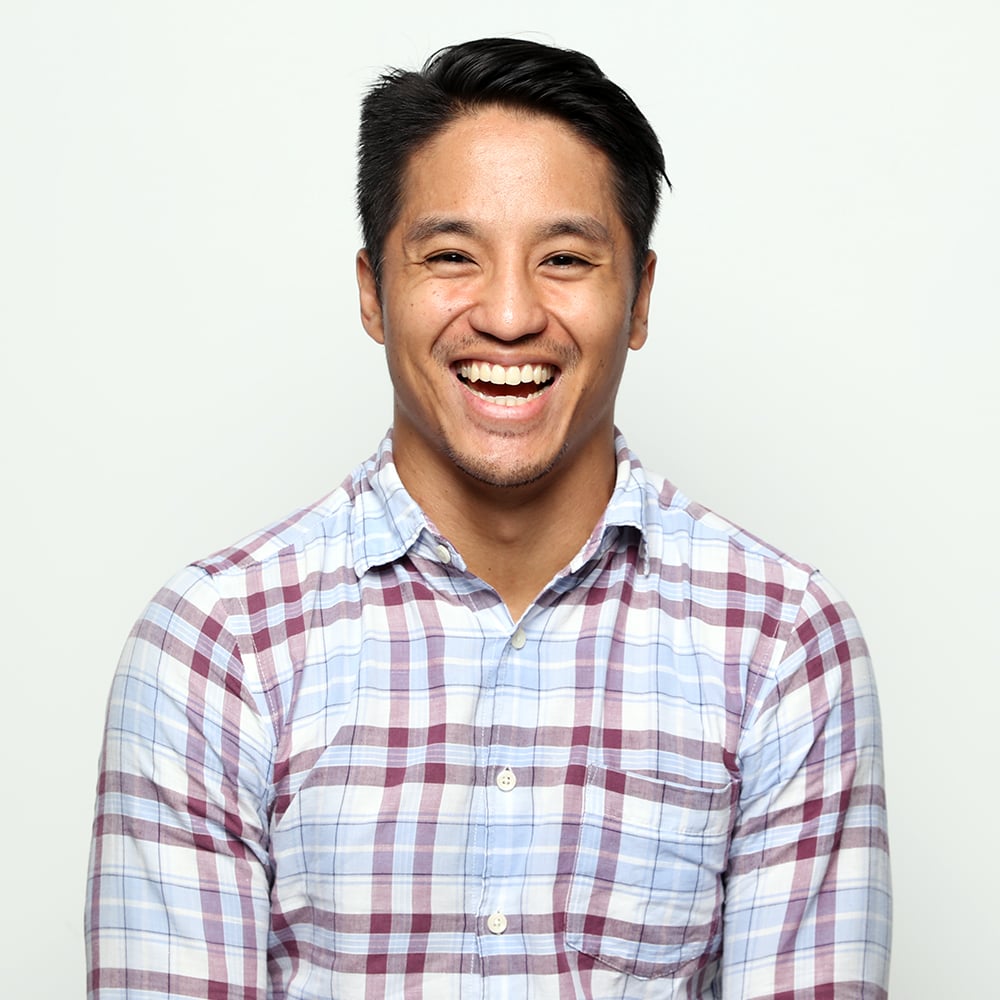